16 replies to this topic

Warning, fuel is extremely volatile and even the smallest amount can cause a huge fire. This guide will minimise the risks involved but cannot remove them. If you are not confident, pay a professional to do it.

Basically, If you burn your face off it's not my fault.

Start by removing both rear under trays and putting them out of the way. Then Jack up the entire car corner by corner and put bricks under each wheel. I went for three layers of bricks with three bricks per layer and a thin piece of wood on the top of each to protect the tyres. Chock both front wheels (in front and behind) to stop the car from moving around. Put the car in gear and take the hand brake off.

When you get to this point open the engine bay lid and remove the gear cable locator bolt and make sure you don't lose the bushes that dampen the cables from the gearbox.

Get underneath the car and you will see a hook which guides the cables through the engine bay. Use a 10mm spanner to undo where it is bolted onto the block.

Right underneath the shear panel the cables are fastened to the car by two bolts, undo these and place to one side. If you have the Cornering Force roll bars like me you will need to unbolt the part where it attaches to the DS wishbone to feed the gear cables through.

The TIS says you should detach the handbrake cables from the calipers but I took a different route for this. start by removing the R clip from the handbrake compensator. Then push the pin it was securing through the assembly towards the shear panel. This will detach the two parts from each other.

Next remove the shear panel by taking the five 13mm bolts out closest to the passenger compartment, the four 17mm nut and bolts that pin the wishbone mounts to the panel (you will need to use two 17mm spanners for this), the two 10mm that connect the engine mount and the two 13mm nut and bolts in the rear corners. From here the panel can be removed and placed out of the way.

This next step is not vital but I would highly recommend it as I learnt the hard way. When you get to this point go inside the car and remove the passenger side seat (four Allen head bolts connecting to the chassis and a 17mm bolt for the seat belt) and take out the rear parcel shelf thing (6 plastic screws and rivets and two 17mm seat belt bolts). When it is out you will see a small inspection hatch on the passenger side. I will come back to this later.

Put two jacks under the tank (one per side) and remove the 4 13mm bolts that connect it to the chassis.

Start lowering it down gently and evenly until the drivers side won't go any further. It will be stopped by the hoses going to the evaporation canister and the fuel filler neck.

Next loosen the DS rear wheel nuts and jack up the back of the car by the lowest subframe point (where the big bolts of the rear under tray connect). Place an axel stand under the point directly below the engine mount (taking care not to obstruct the tanks removal path) and remove the rear wheel. Take out the arch liner and you should be able to see the evaporation tank up near the filler neck spout.

There are three hoses that lead from the tank to this unit which are secured by some crushed on clips. I couldn't find an easy way to remove these so I cut them off with a pair of snips. once the clips are removed pull off the pipes and cover their tops with some gaffa tape to reduce petrol fumes. Next remove the two Jubilee

clips where the filler neck joins the tank feed pipe and pull these two apart. Cover this pipe top with gaffa tape too.

You should now be able to lower the tank down further but the kink in the fuel feed pipe and bottom clips mean a bit of persuasion is required. When the tank is about half out go back to the engine bay and release the pressure from the fuel rail by unscrewing the plastic cover and depressing the valve with a rag (A small amount of fuel will come out). Next go into the car and remove the inspection hatch. Through it you will see fuel feed, return and pump power connectors going into the fuel pump. Unclip the power multi-plug, place a rag under the fuel connectors and remove the fuel lines by pressing the side buttons in and pulling it away from the pump. A small amount of fuel will come out during this process. Dry up the connectors and put some tape on the ends.

This should now allow you to lower the tank out all the way. Slide the tank from underneath your car and move it to another work area. Ensure there is no fuel residue where the tank came from and cut yourself a bigger access hatch (see Vockys fuel pump replacement guide for the right size and position). I didn't do this the first time round, I unplugged the fuel lines and multi plug from underneath (access is tight but doable) the car and replaced the tank and pump.

Unfortunately when I got it all back together the new fuel pump was dead so I had to take it all apart and remove the pump to send it back. Cutting the inspection hatch larger would have saved me about 2 hours work.

Swap your pump housing from the old tank to the new one by releasing the circlip and pulling the pump upwards and angling it for the fuel level arm. The circlip is a bit a of tough one to get into the pro-alloy tank but it does go in so keep at it. At this point I transferred the remaining fuel in the tank to a storage container and covered the old tank pump hole with more tape. Remove the four clips that hold on the fuel filler and evaporation hoses and transfer the hoses to the new tank. I guess the reason Vauxhall used the crushed clips is that they are small and fit neatly through the hole that leads into the engine bay. I replaced them all with Jubilee clips but that made the clearance almost none existent. In the end I had to leave one of the smaller jubilee clips off and fit it when the tank was in situ.


Now simply refit the tank by reversing the fitting instructions.

To refit the handbrake cable I came up with a way of using a trolley and scissor jack combination to put tension on the cable and refitted the locating pin and r-clip.

I would strip the interior to get to the top of the tank, canister side and take the hoses of there. I did it on the hottest day of the year in a confined space with 10l of fuel in the tank and I didn't die

It's a good job you've done it once James

Mine will need doing soon

Spring time I reckon as it warms up a bit!

I'll watch, and make the tea

It's a shit job, hth

Nice clear guide. Will use it one day. Cheers.

Old treed pictures are lost.
Some one still have them

Meant to post this a year or so when I did the job. Fitted a 60l ProAlloy tank on my tod in the garage, which meant an awful lot of scrabbling about on the floor. Not a job for the faint hearted. Didn't quite do it Steve's way but close. A jack that lifts to about 550 cm rather than the generic small ones that only lift ot about 350 cm is a great help with access. I cut the hose clips at the evaporation cannister and replaced them all with new except the petrol filler hose. I didn't use jubilee clips at all, replacing the existing ones with oem type single ear 'O' clips. If I did the job again I'd probably just get rid of the evaporation cannister altogether. When the old tank came out I thought I had emptied most of the petrol but was surprised to find there was at leas 15l still left in there.

The 60l tank is a very tight fit. The top has to be tilted towards the front of the car and then rotated towards the rear as it goes in, and it binds very slightly because the fit is so tight. Working by myself I made a wooden support the length of the tank which fitted on a small jack and allowed me to control raising and lowering both tanks. The loom is also a very tight in that it's only just long enough to fit along the bottom front edge of the tank and around and up the nearside of the tank. Fitting the new pro alloy fuel pump and cannister was easy because I made a clamp out of a couple of pieces of 2x1 wood and two lengths of threaded rod which held the cannister in place against the pressure of the sealing washer allowing me to fit the large holding clip in less than a couple of minmutes.

I've only just filled it completely for the first time last week so I'm waiting to see what sort of mileage I get from a full tank. The idea was a long (three week) trip to the Continent last spring but of course that went nowhere. On previous trips I got fed up with constantly refuelling just in case I ran short somewhere and yet still managed to do that on a couple of occasions.

I cant see the images. Is this available as a pdf document or something similar?   :-)

If you are ftting a 60l tank be sure to check det bolt lenght that lotus used to mount the "firewall" tank cover.....apparently they just used what ever lenght the had....I had to cut almost very bolt to get the fuel tank in...

I have a few pictures, 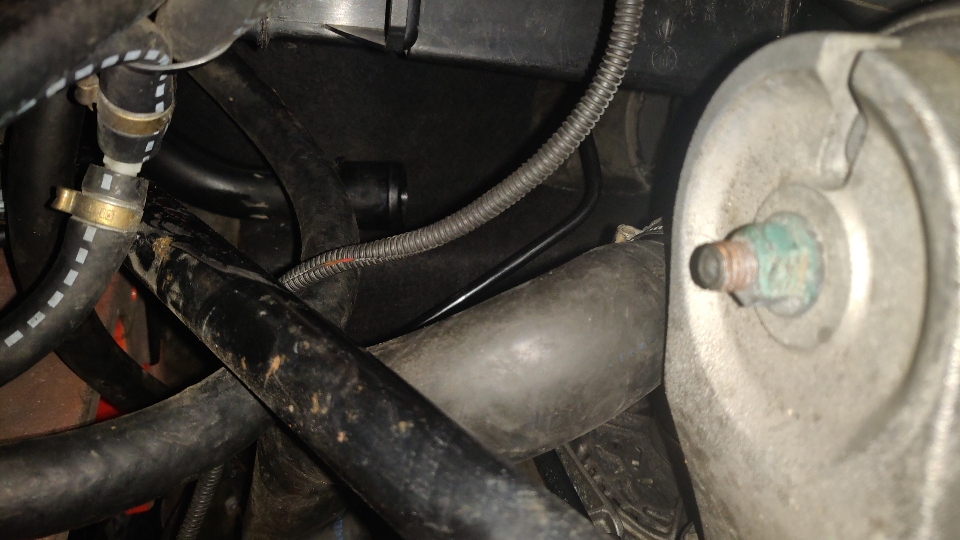 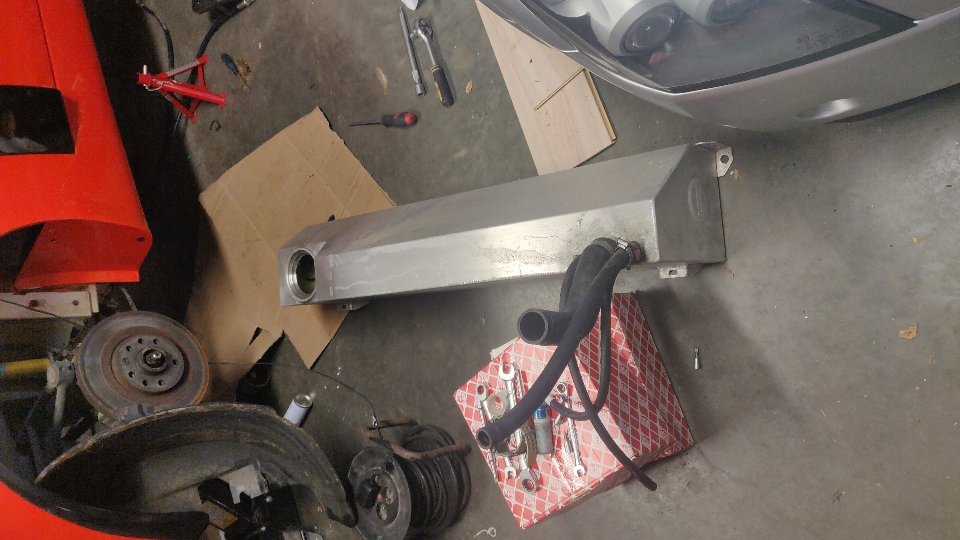 Back to Guides and Tutorials