Z22Se Block Staking With A Jig

As many will know, but some may not, at high engine speeds the side thrust generated by a piston can become substantial and start to create problems for the cylinder liners and walls.

If you know this skip to the pictures.

If you don't:
This is created by the reaction force of the conrod starting to lean as it goes down and the vectors of the force generated on the piston can be considered vertical and horizontal - the vertical is pushing down on the crankpin creating your torque and the horizontal force is pushing the crankpin away from the engine centerline (which the crank bearings and crank girdle have to tolerate) and the reaction force is felt in the rings and the cylinder wall interface.
There is more force resolution to discuss here, but i'll spare you.

In highly pressurised engines - big turbos, small-pulley super chargers, even Nitrous sometimes - the sheer pressure can burst the cylinder, so this is often why other people do the same modification, albeit to make the cylinder wall/liner/sleeve more rigid. These engines will also have big side thrust.

The above will cause problems because the loads will overcome the allowable stresses in the cylinder (i'll stop writing liner etc.) and cause it to burst. These bursts typically take place or start in the area the piston will find itself in after a few degrees of crank rotation after TDC in the power stroke.
Because the top of the cylinder is unsupported on these, and most, engines
The solutions is to create a bridge between the cylinder wall/sleeve by filling in the gap or, in the below, adding intermediate supports to prevent large spans of the cylinder being unsupported. Reducing the unsupported span makes the cylinder stiffer and less likely to rupture.

Note that Gen 2/3 blocks don't have this issue as they are cast with the space between the top of the cylinder and the block walls filled in.
This is called a closed deck. z22se and other Generation 1 blocks are open deck.

[Click pictures for bigger]
This is how I found my sizes for the jig. I also used the GM details in the GM performance build book.
The idea is to use the cylinder head bolts, which are in a regular pattern across all cylinders, as the guide for the jig. The jig, in turn, shows the drill where to go.
Deciding where the dowels were to go was done on the balance of keeping it symmetrical, putting the support where the maximum force was liable to be from the side thrust, and what the block wall layout was.
Ignore the inaccurate one with the crosses. 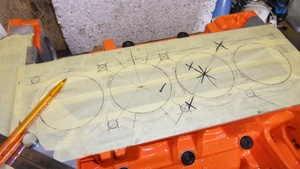 This is the jig.
It is made in a rapid prototyper (RP) and has hardened inserts with 7mm diameter holes.
Clearly if you were going to churn out L850 family blocks you could make the jig from something more substantial - aluminium, steel, better plastic etc. 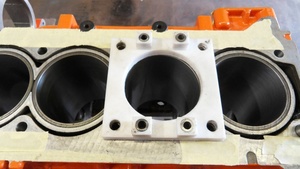 Unless you have a hugely long drill bit in 7mm you'll need to leave the head bolt closest to the hole you are drilling out. Or cut a set of bolts shorter.
3 bolts provides a solid enough location.
If you were making this in metal then you'd probably thread the head bolt holes, but the trick was to set the RP size 0.4mm smaller than the bolts and let the plastic thread. 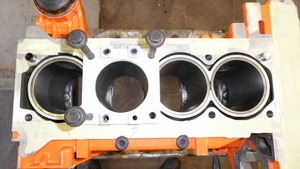 The sharp eyes will see the dowel in the deck surface. You'll need to remove these, or create a more sophisticated jig, which I chose not to do. You can see the hole depth here. There is more meat in the block, but not in the lip around the top of the cylinder and I was concerned about the dowel falling into the waterway under any rocking motion, so I wanted both bottom sides supported. I used 7.6mm aluminium dowels to fill the gaps. They were a snug fit with a slight angle on their nose and the 7mm holes are probably 7.1mm in reality.
Some people choose a brass, and thats a good choice too. 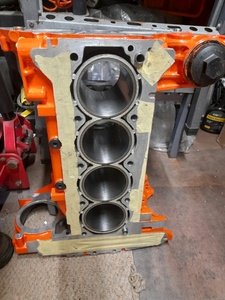 In reality i'll never feel the benefit for the two times a year I flog it to redline, but it's insurance if you're already building a block.


One issue i'd raise is that if you are doing this for cylinder pressure reasons then you need to fill the gaps on cylinders 1 and 4 against the side walls - look at the top and bottom of the last photo - side thrust wont hurt those gaps but a big turbo's pressure will happily choose that as an escape route.

Nice job...
How long are your dowel ?
Is the bottom of each hole flat or did you use an usual drill bit with a conical tip ??

Thank you.
The dowels, from memory, were only 8mm.
I can't 100% confirm this as that block (and girdle) are now gone as I was made an offer for that and a head and I caved in and sold it - that block was to be mine. And I did not keep the build sheet I was writing as I gave it to the new owner. I was too busy choking back the tears at the loss and counting the money.

I used a normal drill with a wide 135 angle nose to go to 1mm before full depth, and then used a flat nosed mill drill to do that last 1mm. If I were doing it on a mill i'd probably just go slow with the mill drill and do the whole thing, but on a drill press it's a tougher cut due to you trying to cut metal-air-metal-air and I find the flutes on a mill drill will wander more so it's better to create a pilot hole to centre and support the flat nose.

The flat-bottomed hole was drilled 0.5mm deeper so that the dowel would sit under the block's deck and not interfere with the cylinder head or gasket.

Ok,
Thanks for the details.