41 replies to this topic

I've been looking for some canards to go on the front of my vx220 to provide a little more turn in bite and help counter high speed front end lift which makes the steering noticeable lighten on my car due to the fairly sizable rear end aero package even with nitro stocks installed. Obviously venting off the low pressure in front wheel arches using louvers is another solution but not the biggest fan of them on aesthetics grounds and I'm thinking I should try some canards first as this may also help with lower speed turn in bite as well as providing a turbulent airstream down past the wheels.
Struggling to find a canard which will fit the VX bumper, any suggestions on this or canards Vs louvers much appreciated

Without causing offence Greg...
It's likely that you're not the first to consider this route.
Not many have gone down canard route, instead there are a few splitter options now, bearing in mind these cars have had best part of 18yrs of people trying things.

Forward rake might help a bit, I'd be amazed if canards did anything noticable until a very high speed indeed.

Hi Ed, could you explaine how these works and why you want canard wings then?

For example they removed these canards on exige v6 430 but had them or earlier cars.

Have you check the Greek Company North plastic or what there name is, they have front vents thats is going inwards instead.

Well, since fitting 4 canards on the front of my VX several years ago, I've been happy with my car's additional high speed cornering ability. I did also have a splitter attached some time before the canards were fitted! So as a comparison, they did give a tangable improvement.

I did read up on what benefits they had before having them fitted. Most noticeable at Corum at Snetterton.

Canards create vortexes down the side of the car. They'll reduce drag in the front wheel well, they'll improve the aerodynamic seal along the side sills/skirts to improve underbody flow, and they'll alter flow into the rear scoops. Why one car hadn't them and the other didn't is a near impossible question without sitting down and studying the whole aero package.

As far as downforce is concerned... sure they're angled into the wind, so there'll be some force on them. But firstly they're tiny, so even a huge pressure will have little effect on a small surface, and then even if you managed to make huge ones, they've got to be able to transfer that load to the body. I doubt your typical canard would hold more than a couple of kilos before breaking off. Rule of thumb for a splitter for eg - you should be able to stand on it.

If you want an indication of what 60 mph does to a small area just stick a hand out of the window, i.e not much.

If you like the style etc that's another matter but I wouldn't expect anything in terms of beneficial aerodynamics until you are at high speed and with a whole package of aerodynamic surfaces working with each other.

Unfortunately wishful thinking, confirmation bias and comparative tests based on human memory are not much to really go on compared to data logging.

But never underestimate the placebo effect!

What a strange thing to say. First it must work from almost 0.
The question is from which speed you start to feel it and actually gain from it. And this is ofcourse dependent from car to car.
But I say around 40-45mph and above.

What a strange thing to say. First it must work from almost 0.
The question is from which speed you start to feel it and actually gain from it. And this is ofcourse dependent from car to car.
But I say around 40-45mph and above.

That's obviously what he meant

Words from someone with a great deal more understanding of aero than you or I;

Simon Saunders (The boss of Ariel) said recently of their Atom "We do an aerofoil package that increases drag by 15 per cent, so in performance terms it slows you down. And they don't work until you're doing 60-70mph. By removing them you've got a faster, more efficient car,"

drag you can overcome with hp

hp will not help you get around corners

Aerodynamics isn't like an on off switch, you don't get to 45mph and all of a sudden have downforce... negative lift on a car is only "effective" at a certain speeds and obviously until you get to the "effective speed" you have to overcome the drag caused by bolting on the wings etc.  and i'm sure that's what they Ariel mean.The air flowing over the component (wing, Splitter etc) is always happening from the minute you start moving.

if you want real downforce on the vx imo you need to do a number of things;

a coupe or something to help the flow over the car to the wing is ideal, its just a shame they are heavy.. there are loads of other tweaks you can do like a small gurney flap under the rear wing, multi-element wings, etc.. but the main thing you have to understand is that no 2 cars are the same (unless you make them that way) and one thing which works on one might not work the same way on another, take my car and nevs car for instance.. putting canards on mine is almost pointless but Nev would probably find more of an advantage due to not having side skirts.

Thanks all for a very rounded discussion. Having thought about it I can see how the VX mainly benefits from improving ground effect, to that end I'm planning to increase the splitter projection and put on some decent side skirts. Regards the lifting at high speeds it would seem the only way to go is Gurney's or louvers so I'll have to factor that into my plans, think I will have a play with some cannards but much more as a vortex generating device to work along side the skirts

People like to call it that, but it's not. the only cars that used actual ground effect were that spastic F1s of the 70's. what youre dealing with is simply controling underbody flow, and making effective use of a good diffuser (diffuser /= ground effect)

I would start with the free modifications and increase the rake , raise the rear

I would start with the free modifications and increase the rake , raise the rear

How its your sideskirts attached ?

By using this on the side wall and then, another curved plate(sideskirt) to remove and install easily? 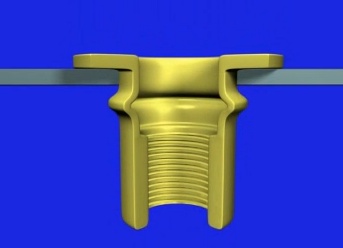 I´ve bought a 160cm wing with swan neck mounts with 80cm between mounts.

There are 83 cm between pilars of rear subchassis, so I´m designing custom plates.