18 replies to this topic

Hi,
I'm currently at Donny, feeling sorry for myself as I want to play out but the car thinks otherwise.

I've suffered from a P1515 throttle position fault for a while and have put up with it as it was usually once a track day, but it has been getting worse recently and I can't even get through a session.

I've cleaned the connectors on the throttle peddle, 2 x ecu and the c throttle body but it still pings the fault, I've done this 3 times the last was 2 days ago. All the connectors seemed good and had no corrosion.

Is there anything wise I coukd look for before putting new throttle peddle, throttle body or new loom (which I really don't want).

Is the earth's an issue? Is there any other checks I can do?

I've run a log and captured it but I'm not the best in trying to make sense of it.

If anyone has any bright ideas or is a wuss at reading the logs then I'd be great full for your help.

(I've also sent the log to Peter at Dutch) 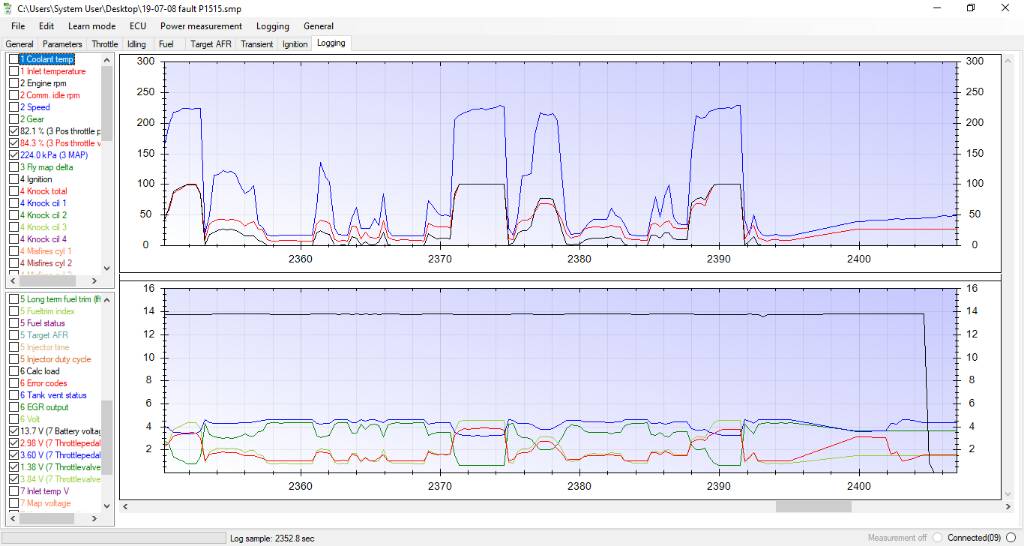 Have you checked the two plugs behind the header tank?

I have previously, but not last week, I'll have a look now, ta

Looking at your log one of the tracks isnt sending back a correct voltage, (dark blue on lower log)

As FLD says connections are the likely culprit.

These are the ones to focus on.

In that order I would say. Can you quickly switch off and on to clear?

Yeh I've checked all connectors and am leading towards TB.

I've sent the Log to Peter and he said it could be TB or could try loading some new throttle settings on the map as other people have had issues with this LS4 TB.

I have also been intouch with Chill and he has had similar problems and has given me some throttle position settings that are different to my map.

So when I have time next week, I'm going to remove the TB again and give it an even better clean and check again that it is opening evenly with no heavy spots or binding which it wasn't last week. Then I'll try with the new settings.

My issue and concern is that its on track that it plays up (lots of heat and load) . So I can try on the road but it probably won't do it or I get banned trying.😩

I have Oulton booked on 31st July and don't want to waste another £229 with my head in the engine crying and getting frustrated as I can here everyone else going round..!

Ideally I'd like to take a spare working LS4 TB to rule it out.

Touch wood it will behave if I change the settings.

I've attached a few pics if you pro's could have a look. The first is the response off Peter with suggested throttle valve speed. The 2nd is my current TVS, which is alot different, especially on the drive section. What exactly is these new setting doing? Isn't slowing the speed down making the situation worse? & why is stationary different to drive.

The 3rd pic is Chilli's throttle pedal response vs 4th pic which is mine. Is this trying to improve alignment of the throttle pedal position and TB position so that there is less difference and less chance of pinging a discrepancy?

Also one other anomaly was that under the parameters tab (pic 5) the TB is down as a 68m LSJ and not a LS4? Is this just a label as when I change it the throttle settings stay the same.

Again any help would be appreciated 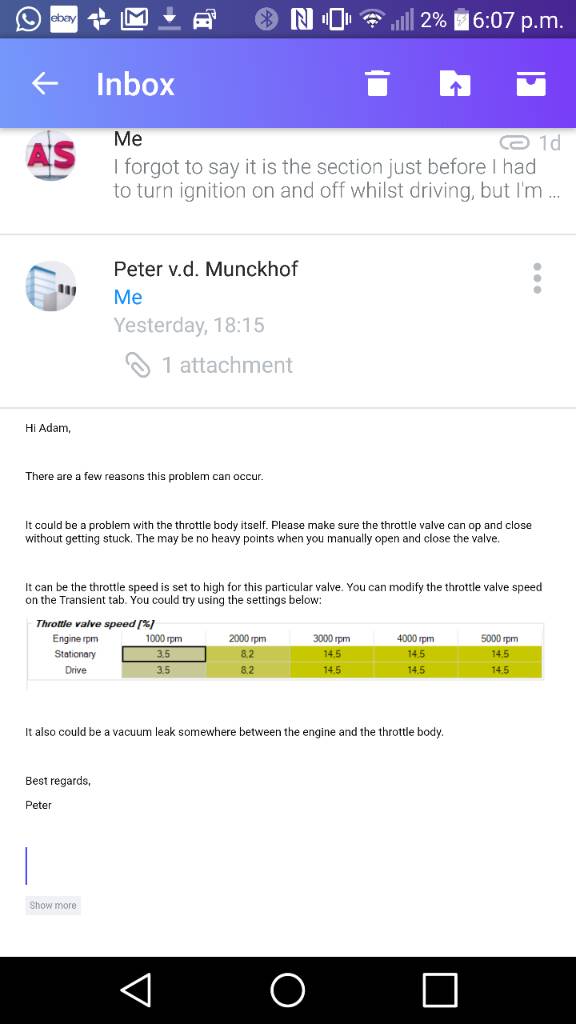 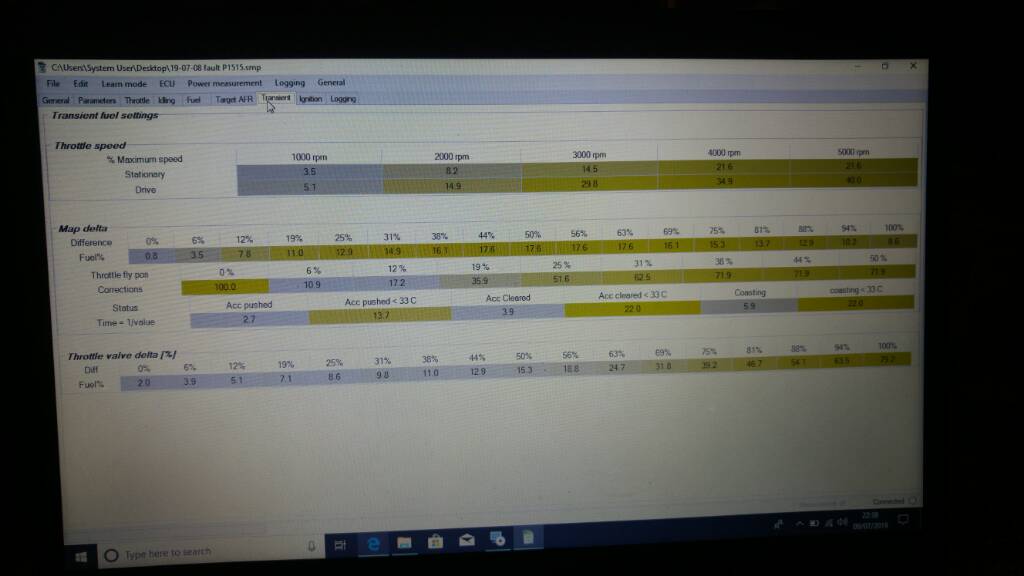 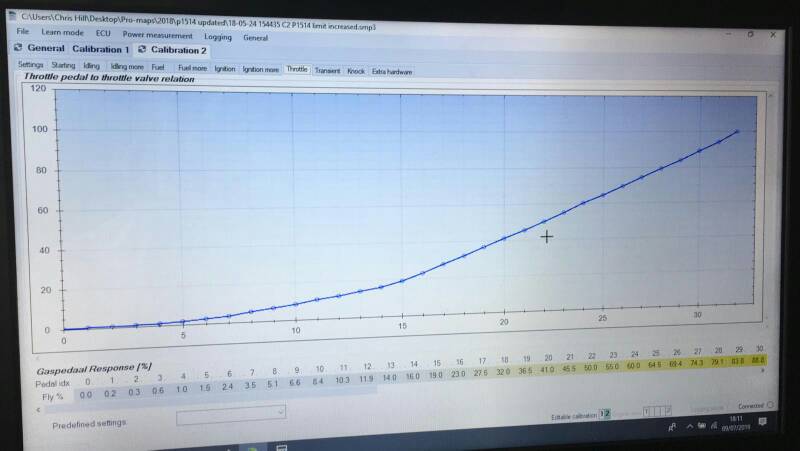 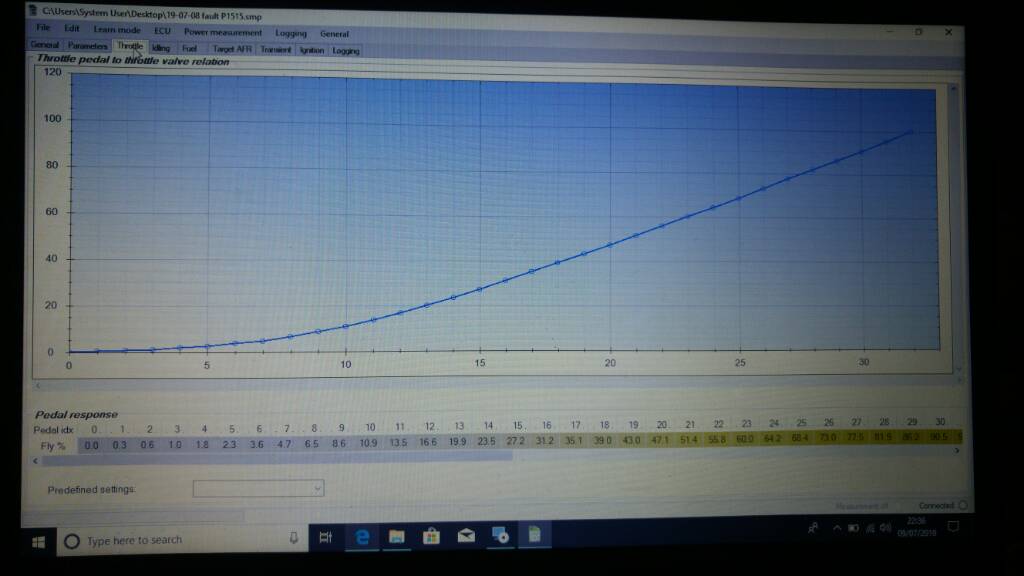 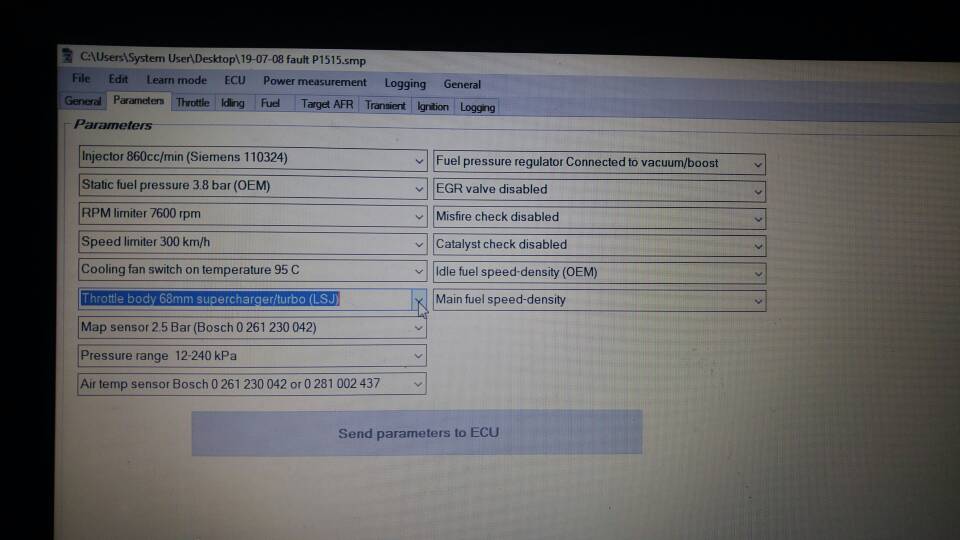 Try a full vac leak test from inlet tract to inlet manifold. I use an air compressor at 2.0 Bar and you can instantly hear leaks and locate them in 5 seconds.

i can order and ship you one by the 21st if that helps?

If it helps trouble shoot I have an LSJ TB on my car. You're welcome to try it to rule out TB problems. I appreciate its not the LS4 TB so might be completely useless for you but thought I'd offer. I'm in Nantwich so not a million miles away either.

Thanks for your responses.

Nev
Please could you tell me how you got the pressure into your inlet manifold? Where did you put the air in? I presume your pressuring up between the closed TB and the inlet manifold?

Joe,
Thank you for the offer of getting a new TB quickly but I'm going to try and rule out the TB first, b4 forking out on the new LS4.

FLD
Thank you very much for the offer of lending your LSJ it is very generous but I dont think it will run properly with my map.
I am a bit confused as the zzperformance page says LSJ LS4 but I thought they where 2 different valves and sizes??

Please see attached my TB, which I presume is the LS4 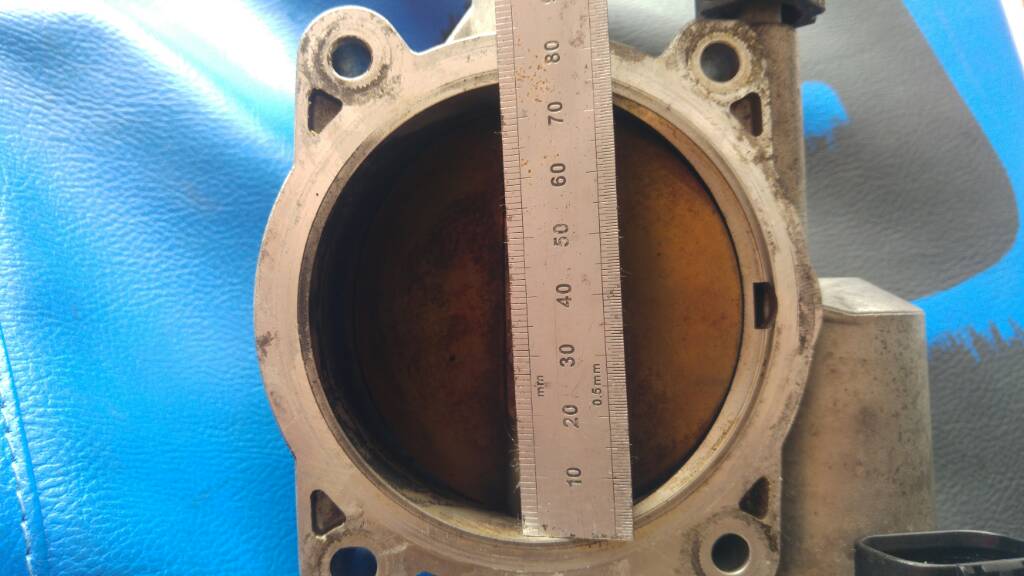 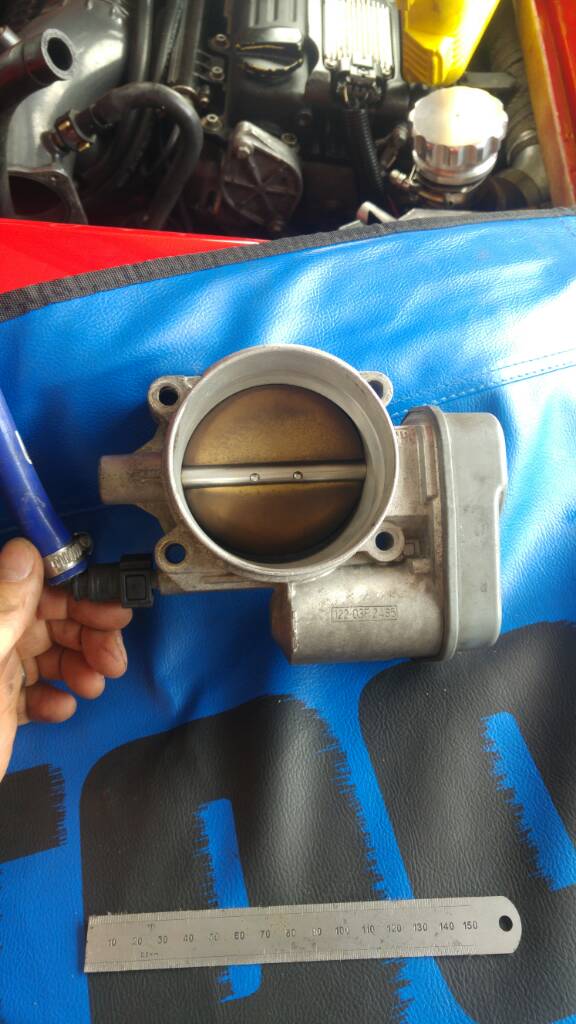 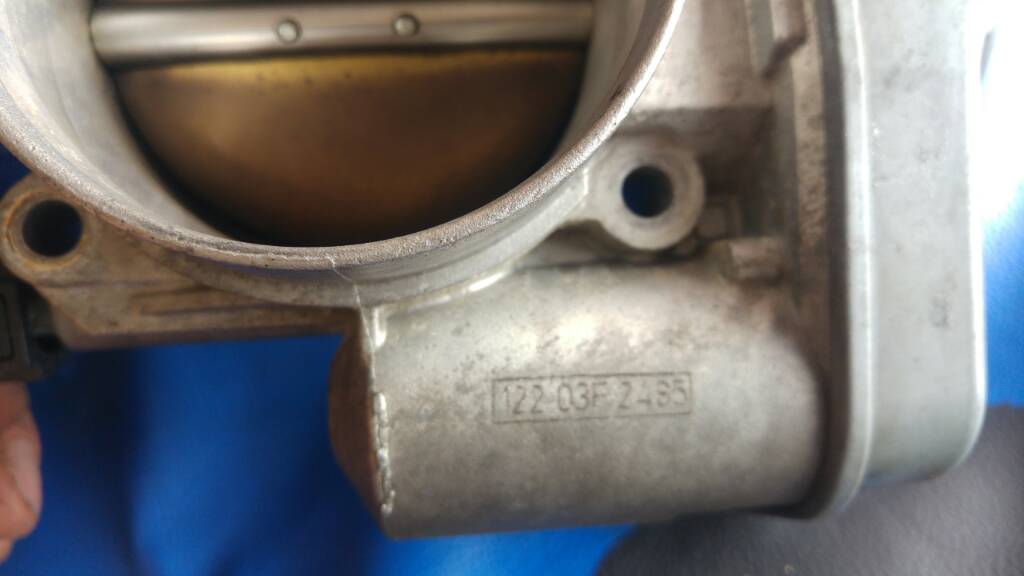 Also is the LSJ a straight swap? Or would I need to rewire?

I have previously, but not last week, I'll have a look now, ta

I have to zip tie my loom of doom to the roll bar support to ensure there is absolutely zero pressure. I have also had issues with the fuses and more commonly relays in the boot.

Is it happening in corners or when you hit curbs e.g vibration based or just in a straight line?

I don't think it's specifically round corners etc but more when I'm back on the power, which is usually the exit of a corner. There is obviously a big change in accelerator pedal and then TB that follows and think it just isn't keeping up?? Maybe changing the throttle response parameters may help?

I don't think it's specifically round corners etc but more when I'm back on the power, which is usually the exit of a corner. There is obviously a big change in accelerator pedal and then TB that follows and think it just isn't keeping up?? Maybe changing the throttle response parameters may help?

Could be the engine moving causing it but usually when its loom of doom pedal just stops working completely. I.E no throttle.

Yeh cleaned and sprayed multiple times but haven't Strapped up yet 👍

Just an up date if your interested, as I may have found somthing😊and it was a frayed positive on the battery, read on.

I spent most of the day tie wrapping all the cables in my engine bay. I removed the N/S wheel and liner and also removed the water expansion tank along with the air filter and TB. I thoroughly cleaned the TB and WD'd the pivot points on the TB but to be honest it felt quite smooth.
I have tie wrapped everthing and relocated the blue plastic plug from under the expansion tank and put it behind the header tank bracket, thought it would be a bit cooler here.

Then I had to look at the front and the battery. The battery was already on charge, but I had the earth lead to sort out. During the last track day I was clutching at straws and took the battery out to clean terminals, then I thought I'd take the main earth off the chassis, but the bolt started turning but not undoing....... Nightmare and I couldn't tighten it back up. There is no access to the captive nut behind as its in a box section. There is a 25mm hole on the inner arch which is offset by about 3 inch. So I got my inspection camera and had a look for access to nut but found that it's a rivnut so no chance of getting a spanner on it. So in the end I had to drill a 25mm hole on the inside (Battery side) and another from the inner arch and put an additional earth in, as I couldn't trust the now slightly loose earth.
So the moral of the story is, dont touch this main earth unless you really need too.

So with the new earth and fully charged battery I Re installed the battery and hoped it would start but the starter would spin over but no spark. Only the battery light would be on the dash not the abs EML etc, also there was no power to the ecu (no power to my OBD reader that was connected), no power to my lights, but power to my stereo, blower, starter, AFR guage.
Initially I thought alarm and immobiliser as I couldn't set or unset the alarm but the no lights through me.
Then I noticed on the battery one of the positive wires was damaged, I new about it, but didn't think it was that bad. On closer inspection it had a break in it. There are 4 largish positve wires going to the battery, with 2 wires going to 1 terminal each and 1 of these had fractured. This has happened because the battery has been moving in the tray and rubbing on the tub (this was covered with fabric to stop a short but enough of an edge to wear the cable out).

So I think this may and its only a May, have caused brief power cut to the ecu when driving and the P1515 was the first to ping.
So obviously I have repaired the connection and packed the battery with 25mm kingspan so it can't move.

I have also reprogrammed the ecu as per Chilli's throttle settings, so hopefully that will be it. I've also got some other settings from Peter at OBD2tuner to try.

Ideally I'd like to take another TB to Oulton on 31st just in case.

Sorry for the lengthy post but if it helps 1 person then it's done its job.
I definitely think it's a good idea to strap all the cables as flexing won't help any old fragile wiring as I really don't want a loom of doom. 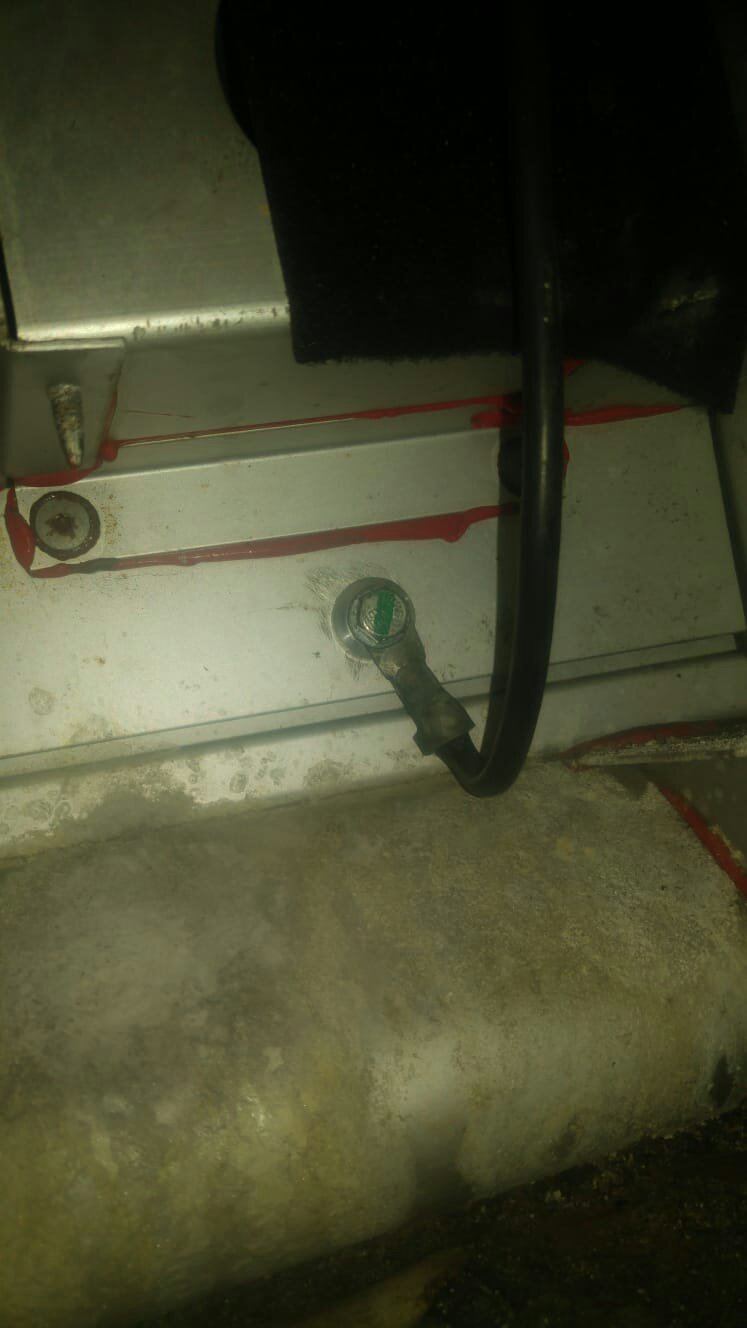 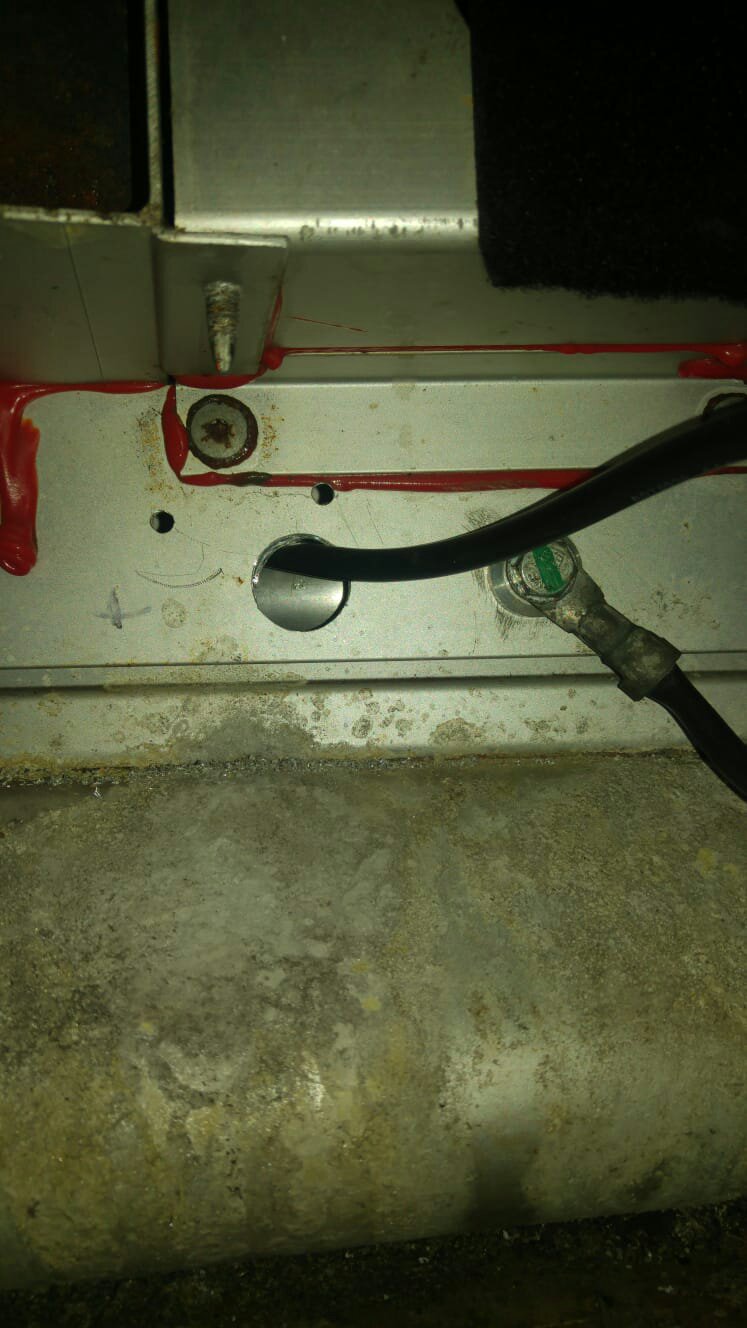 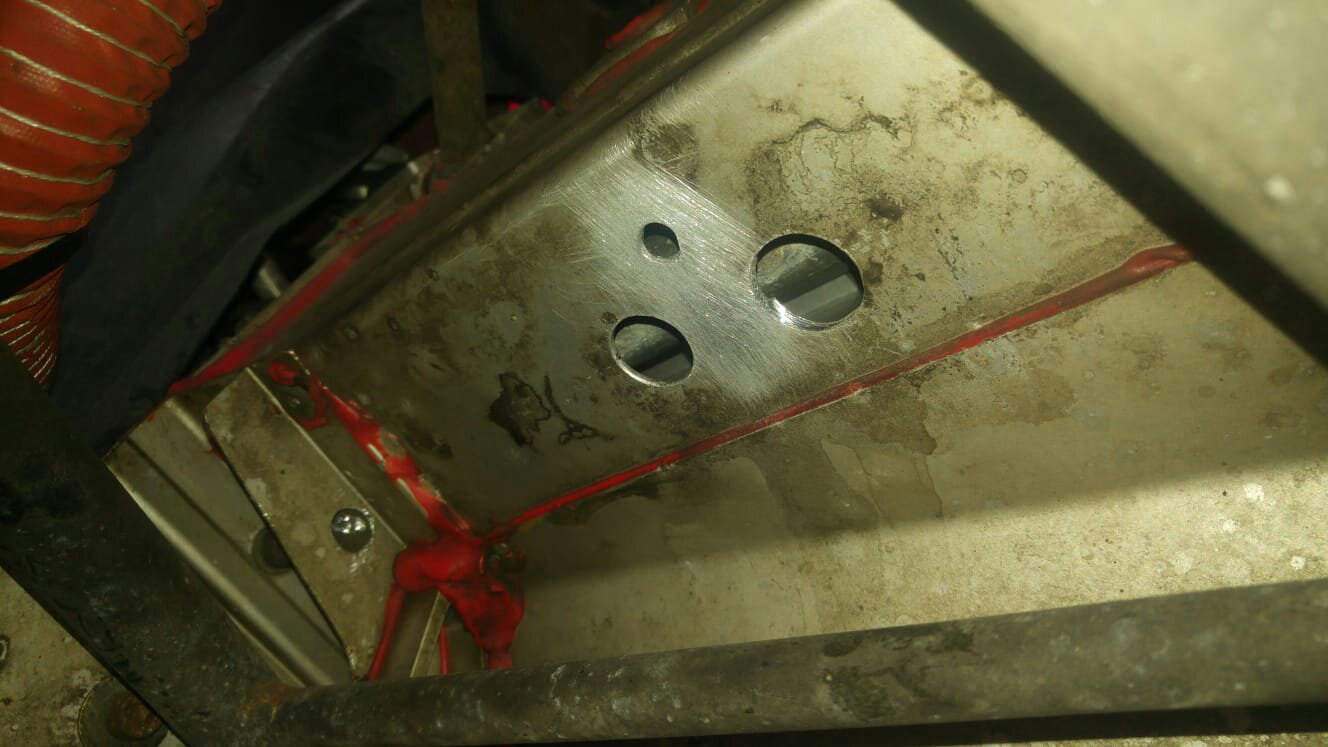 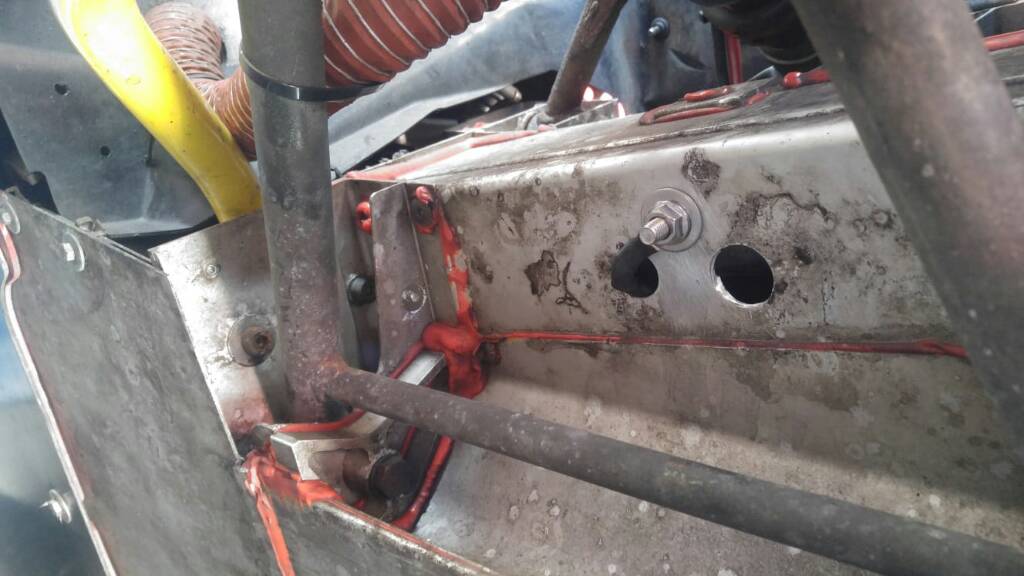 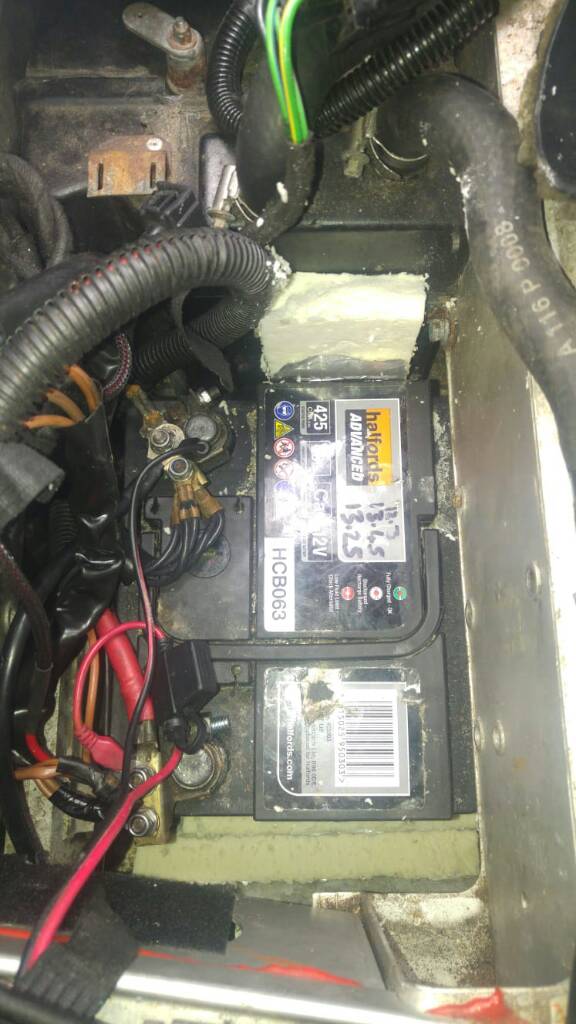 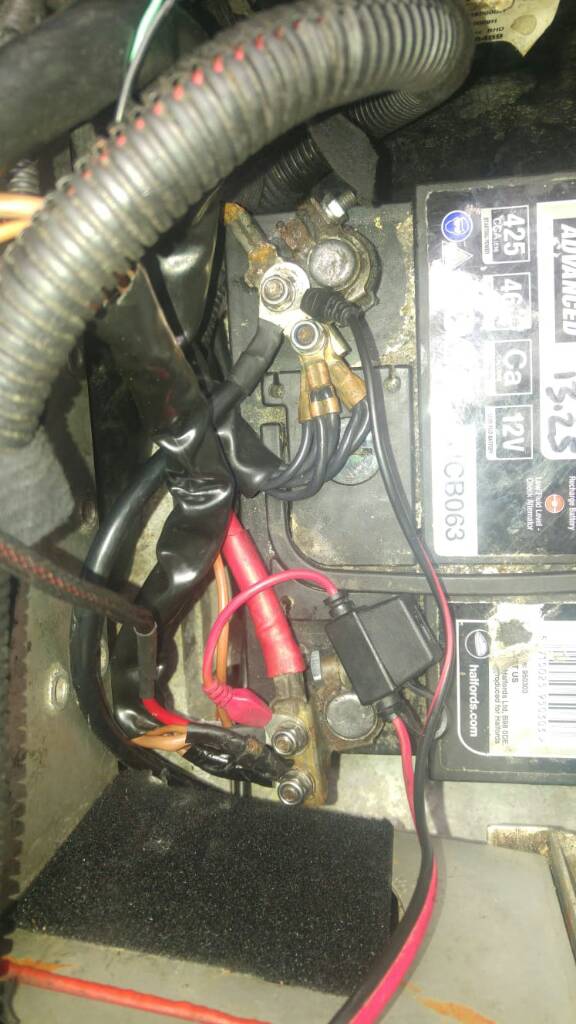 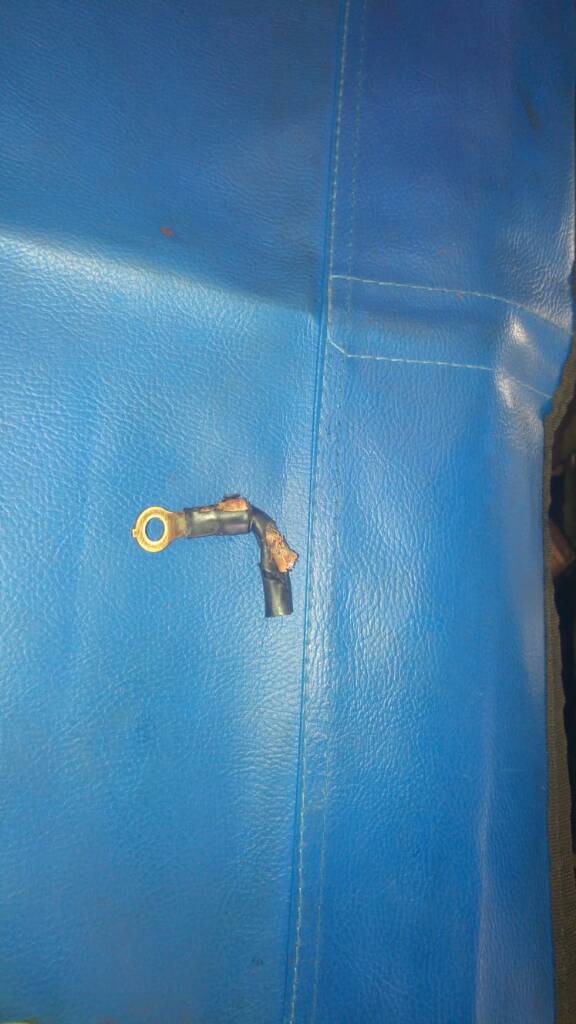 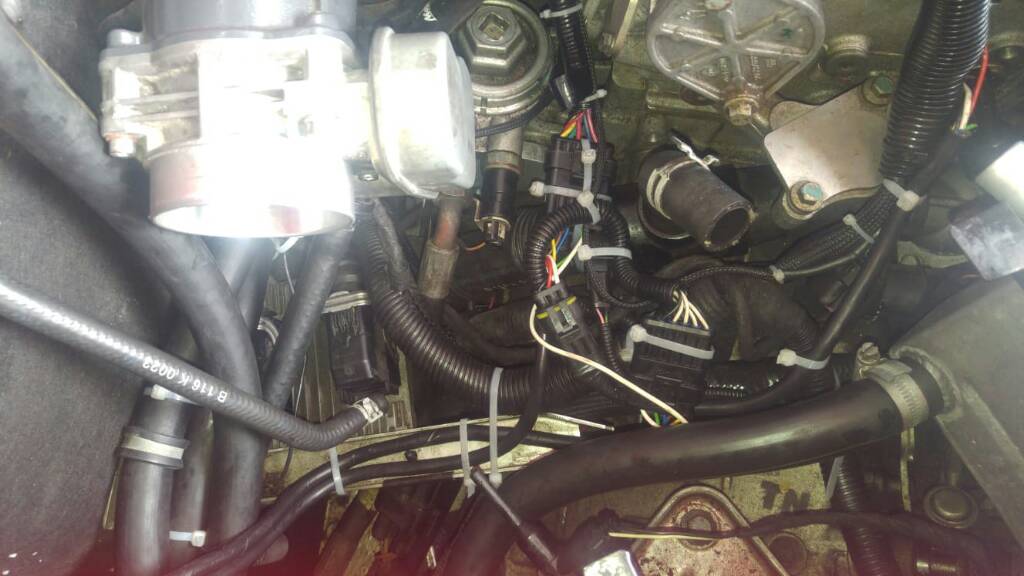 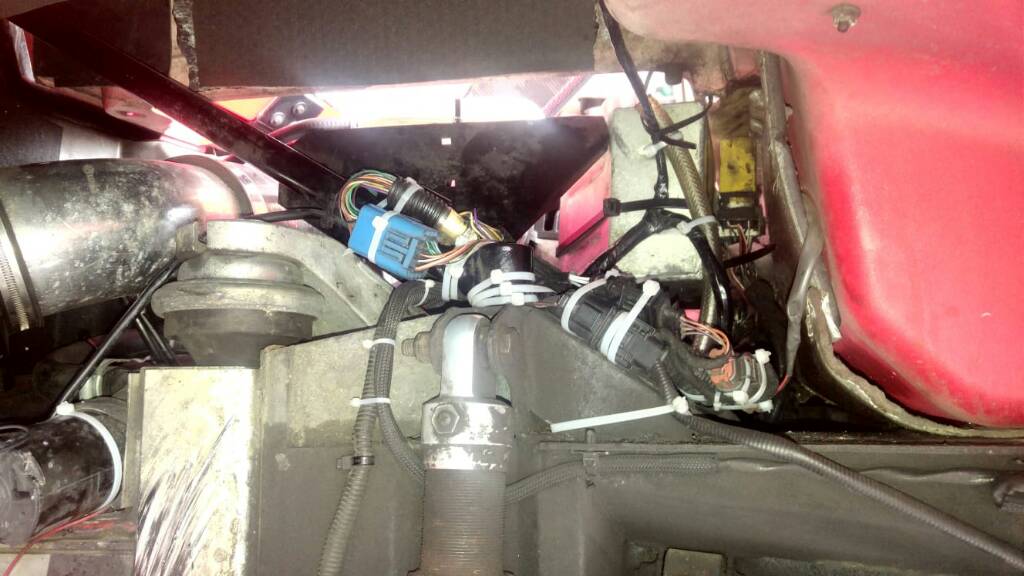 Just done a track day today at Oulton and no error codes, so it looks like my P1515 error code is sorted 😊👍