13 replies to this topic

Looking to do a wishbone refurb in the future, so whats best to protect them. Many go for powder coating but what about Hammerite paint or is there something better.

I agonised over this for ages. In the end I decided not to powder coat and did the following:

Difficult to comment on durability since, as it's not really been driven.

I went for zinc and powdrercoating

There is a ral9007 which has ali particles in it and the train companies use this colour as a rust protection.

This is probably the best powdercoated finish for protection.

I powder coated, and within 2 years it was pealing in places...
Will be doing it again this winter, and plan to use POR15 paint...

Once the powder coating gets chipped it can retain water and hide corrosion eating away at the metal with little or no visible indication. If its zinc passivated first it should stop anything too serious happening to the steel before you notice the powder coat blistering but I'd personally use something like POR15 as it's easy to patch any chips as and when they happen rather than having to strip and start again.

Im just having my Elise ones zinc plated and yellow passivate. Going for the original look.

I worked for many years in the 80s and 90s for the old Lynx Engineering where we restored mainly Jaguars, D types in particular but also C types, the ex Steve McQueen XKSS and assorted XKs, a GT40, several 1950s racing Ferraris, ex F1 stuff, a pre war Lagonda - loads of valuable stuff.  Later I was with Prowess Racing Restoration where we did much the same thing but on a much more varied selection of cars, the most valuable I recall was a 1932 straight 8 supercharged Alfa Romeo, one of only 2 with coachwork by Touring of Milan and valued then at £12.5m.  I mention all that to make the point that whilst we had to restore authentically we also researched extensively to find what would also be the best quality process or material for the long term.

In both companies we found that powder coating was by far the inferior treatment, as The Hood mentions, it cracks and then corrosion can take hold underneath completely unseen, potentially disastrous for steel tube.  Our preferred treatment was Cadmium and passivation, when concerns about heavy metals in the environment rendered Cad and pass unusable we replaced it with Zinc and pass which we found to be, for all practical purposes, as good as Cad and pas.

There are other treatments better than powder coating, like Parkerising but this produces a distinctive black surface, visibly incorrect for a VX.

Hammerite?  How old are you?

I used POR15 for economy.  It's peeling and chipped in all the wrong places.  I think plating is the only way

When I did mine I had the opportunity to have a friend working on a surface treatment company. First I had them sandblasted and then he put a coating called Nedox sf-2 on them.

From what I recall it´s a layer of nickel, then they spray it with teflon, then temper it in the owen or something like that.

This was six years ago and they still look like when I first got them. Might be worth checking for something similar. 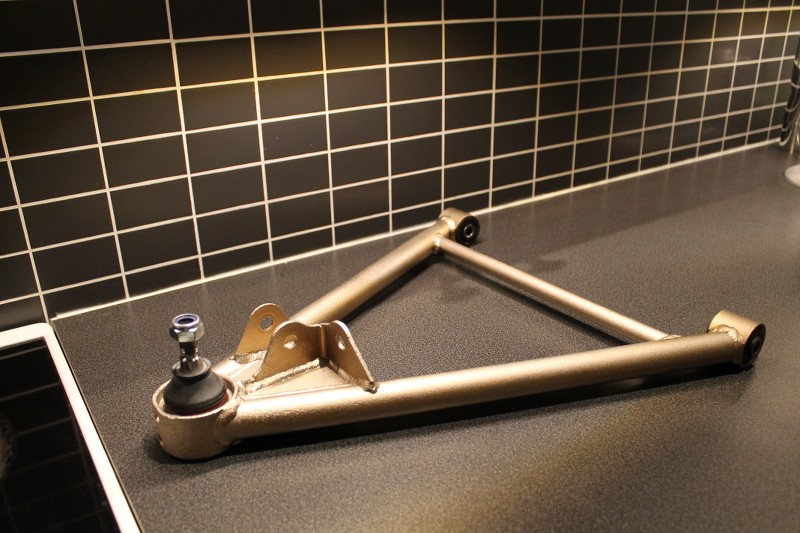 I have used POR15 with reasonable results. Spent lots of time on the surface prep, and then built up several thin coats. It's easy enough to patch up if you chip it at a later date, unlike powder coating. Just consider it as POR05, rather the 15 years the name suggests.

I had mine triple plated first.  Electroplate slows as impurities coat the aprt.  You plate, re-etch and then replate.  Its a three step process.  Then bake out any hydrogen from the part to stop hydrogen embrittlement and then passivate.  This is good corrosion protection.  I then etched mine and sprayed them with rubberised underbody coating.  Its lasted 10 years so far.  If I were to do it again I'd use the por15 instead of the underbody coating as its a nicer finish.  Otherwise I'd do the same again.

por15 can be touched up if required, very durable finish.

por15 can be touched up if required, very durable finish.

I agree.  I would have gone for plating if I could  have found a service close enough to where I live but couldn't.  So I disolved all the suspension rust in a bath, and used Por15.  I'd used Por15 on a cast iron garden seat previously and it was (still is) totally impervious to the weather in a very exposed place.  I finished off (the suspension) with Mike Saunders underbody seal

which is commonly used and approved by the automotive industry in Germany.

Mike Saunders very messy to apply by hand as it has to be heated to melt  before applying, but it's very effective.  This is not for those who like their suspension nice and shiny.  It remains sticky and attrackts dirt - my suspension is black with dirt, but I know that if cleaned off, underneath, a combination of this and Por15 means the surfaces are otherwise pristine.  If my suspension does take stone hits that might chip (never checked) the Mike Saunders is thick enough to seal the gap. Other underseal protectants exposed to the weather that I've used, including Waxoyl and Dinitrol, all dried out and flaked off after a year or so.  This stuff doesn't dry out, it remains horrible and messy but very effective.

Back to VX220 Discussion