12 replies to this topic

Not sure how power efficient this will be but it should be pretty warm come winter. Reckon it'll be okay with some socket doublers plugged into my 5m extension lead? 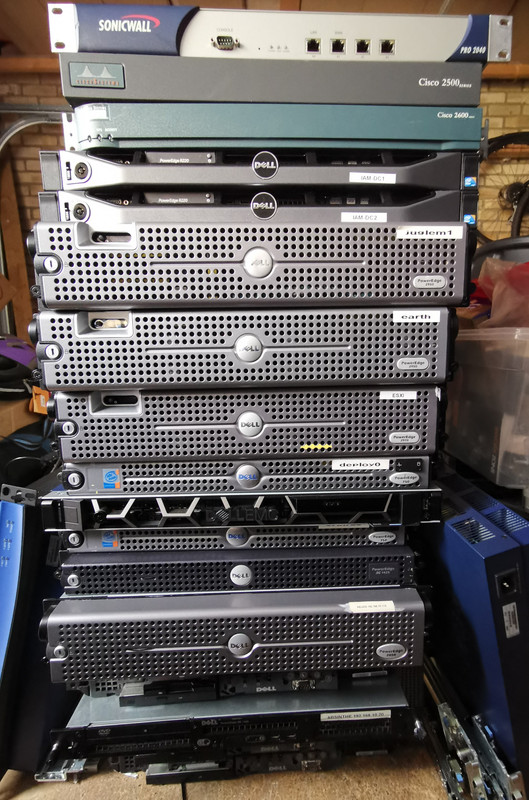 I've already filled the passenger seat of the VX with a couple of rack mount monitor/keyboard thingies and a couple of switches. Will crack on with the drivers side tomorrow.

I think the Cisco 2500 router was old when I did my CCNA 20 years ago. No idea where they came from or why they were hanging around in the office.

consolidate that down  , or better still go AWS

Bar three of them, which I'll be using here at home, they're all for the knackers yard once I've made sure there's nothing sensitive left on any of them. That was fairly consolidated as it was, the three 2u boxes were all ESXi boxes running multiple virtual servers and virtual desktops. One of my fcuknugget colleagues had even installed a qemu baremetal virtualisation server on one of the virtual servers. Fcuking nested VM's using totally different technologies; total lash up but fair play to him, there were 20 containers running inside that virtual machine alongside half a dozen other proper VM's on that physical server and it all worked. Certainly a lot less kit than there was when we moved from London to Chester in the first place.

The kit at the datacentre in London is even further consolidated now. Gone from four full racks down to one with only 70% of that actually populated thanks to virtualisation.

Still can't get my head around the AWS (or Azure or el goog's) stuff and just what of their services are needed or how to even guesstimate the cost when everything is so variable. It always looks attractive up front but then it soon starts racking up. I keep meaning to invest a couple of weeks in trying to work it out properly but then real life intervenes.

I read that and managed the words but I've got no clue what it meant!

Proper technobabble to me I'm afraid.

Have you considered ebaying them?

I have not touched vmware or a server now since 5 years.

It's the first time I've had my hands dirty for a couple of years and only because we've permanently closed our office and are all working from home now. The usual process, is spec server with Dell. It arrives at datacentre pre-configured and with VMware installed. The datacentre ops people install it in the rack, power it on and disappear off to do whatever they usually do and call one of my colleagues to say it's in and over to us. Unfortunately, apart from half a dozen developers scattered around Europe, I'm the only vaguely tech resource left in the country so it's kind of fallen to me to make sure they're safe to dispose of.

It does mean I get to keep that year old R440 halfway down the pile for home server duties......

Hamilton is a Pop Star

Garage door is dark grey. Recon I could fry an egg on it when the sun comes out. Front door same colour. Already had it replaced.

Is that a bicycle I can see in the background?

Those are my two Specialized bikes with flat tyres all round. One of which is a full stealth black jobbie that would suit Batman. What you can't see is there's no current way to get to them, unless I rig up some Tarzan style swinging ropes from the joists. Even so, the bike has been used more recently than the VX.

I rig up some Tarzan style swinging ropes from the joists

I NEED a video of that!   I may even tolerate the loin cloth X(

Back to Off topic Chat