Just setting up so if you see an invite it's me. Should be under Captain Spampants or steampunk_willy im not sure which it uses...?

i dont really play this anymore, i have moved back to iRacing as it offers more of a racing game imo.

this weekend i have entered into a 5 driver team to compete in the daytona24. a full, real time 24 hour race compete with day / night transitions etc.

Tried going up against the stigs 458 Italian time at Imola tonight.

I also moved to iRacing but if you want to have a quick session with your friends then Assetto Corsa is the best choice !

And the street cars are so much fun to drive !

Thats my Sim, but now with ultra wide screen 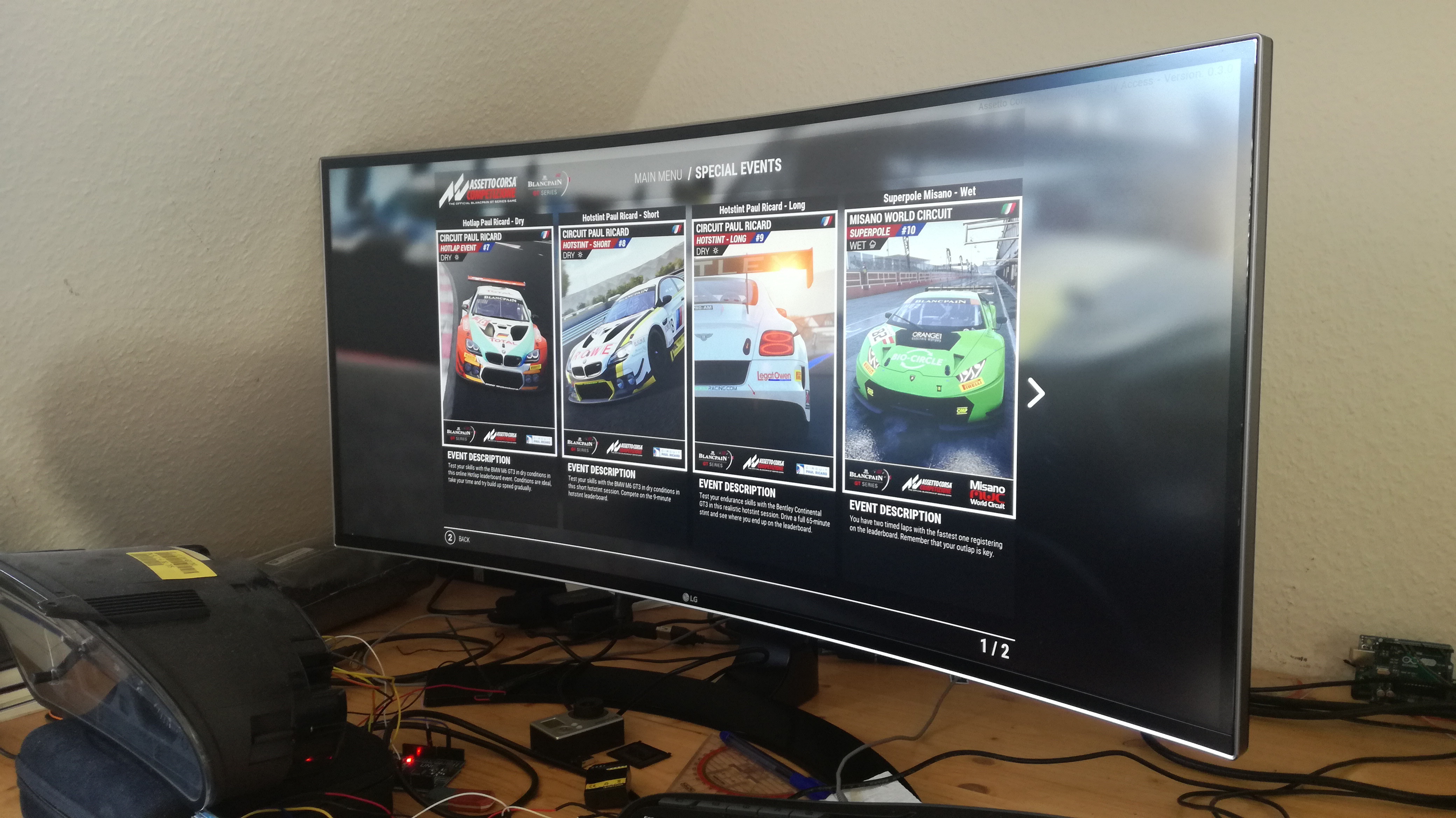 Yes it is, but you must see it the other way. You dont pay for the game, you pay for the exclusiveness to be part of a great community where the people are focused on having good races.

The ranking system is very hard and makes you drive much more careful and clean. The races have a very high quality that you can never reach in AC.

I still like AC more than iRacing from the pure driving experience.

But iRacing does everything around it much better.

Chris, which Rift are you using? I'm thinking of taking the plunge.

If you are going to get one get the one with the touch controllers, you get an extra sensor which makes tracking just that lottle more stable.

Your welcome to try mine before you buy if your unsure


It is, but... you are paying for a service, its totally automated system, each 3 months classes as a season and has full championships etc all running seamlessly.

you can get 3 months for £6 so its worth giving it a try.

And you can earn money when you drive regularly in the series that you signed up to.

So its possible to use iRacing for free.

Well, not quite for free. You get a maximum of $40 a year if you have maximum participation.. but if goes towards for sure.

Your welcome to try mine before you buy if your unsure

Super late to the party, but got into this game big time in the last couple of months. In the last couple of days spent ages trying to find a VX mod, finally found what I assume is an old conversion from FM4 and then edited most of the data and the model to get a VX collection of acceptable quality.

Here is my finished result: https://mega.nz/#!Dh...VKscco7IyLQgJGk

It includes an original 2.2 VX220, VX220 Turbo and VXR220, all with as close to factory colours as I could get as skins. Engines are pretty close for power/torque (VXT has a bit too much torque), gear ratios and weight match, but suspension is a straight copy from the in game Elise. Visually I managed to differentiate the headlight/taillight fixtures of the NA/VXT and hide the front splitter on the NA, but couldn't find a way to fully get rid of the rear spoiler. The VXR probably looks closest to factory as adding the black bits was not too hard. Unfortunately the wheels are a bit crap and for some reason, visually the tyres are massive, even though data wise they are correct (at least for width).

All three cars perform roughly as I'd expect compared with rival machinery. If anyone with any physics editing skills wants to have a crack at making the suspension more accurate, then be my guest.

i wouldn't have a clue, i started modelling my own car but never finished it..

i think the majority of people have moved onto iracing now as there is still a very strong multilplayer following..

your very welcome to join the fun..

i wouldn't have a clue, i started modelling my own car but never finished it..

i think the majority of people have moved onto iracing now as there is still a very strong multilplayer following..

your very welcome to join the fun..

Thanks but iRacing is waaay to serious for me to be interested, especially as I'm not overly fond of online racing (is there offline racing in iRacing even?). AC is perfect for there's almost no limitations in what you can get out of the game if you're willing to learn how to mould stuff to your liking.

We have a couple of vx’ers who play... some are rookie, D licence and im A licence.... so you would be with others.. its actually really good fun, you just have to follow the driving rules...

Back to Computer and Console Games