How will you vote?

no one has faith in corbyn then

The batman for PM!

Exactly why polling companies should be given a bit more credit! They have to predict winning constituencies, weight by voting likelihood so on and so forth. No easy job that. The poll here simply says who people will vote for, if all the Tory votes are in the same location and the Lib Dems are in different locations then the LibDems win by a landslide

Lib dems, Cynical bunch of indesive east oxfordites, Corbyn, basically a complete twat who couldn't manage a fart without shitting himself, Boris, a baffon but as bright as they come, so let me think. If there was no Brexit it would be a huge Boris win without a doubt as nobody else even comes close but who knows how this will go?

If there wasn't Brexit Boris wouldnt be PM

But he is only trying to force Parliament because it has stubbornly refused to execute the will of the people. So, truly, who's the baddy here then?

(dont agree with Boris-the-Racist and his unilateral efforts to try and force parliament into no deal).

Stop listening to JOB on LBC. I kicked the habit 6 months ago and my life is much happier as a result of not listening to his constant whining and bitterness.

my personal view is that he led the parliament revolution against May (and bear in mind Boris was at the meeting the deal was agreed and did not oppose it then!) and is now saying parliament are holding him up with regards to no deal (and the will of the people was not no deal and not a backstop exit - in fact it does not dictate the terms of exit at all) - as a concept of him complaining about parliament in that respect I find totally hypocritical.

I cannot bring myself to vote for a party that is led by an openly racist person who is one of the most self serving MPs of the modern era. All his beliefs, positioning and approach has been to further team Boris, not to execute the will of the people in some just way.

And I do not listen to JOB at all, have seen the odd you tube vid but thats it, I found him massively biased and rather a pointless person to listen to - much the same way I despair at people waving their arms around saying how wonderful Boris is and a man executing the will of the people. He is all about Boris. Nothing else.

One of the most self serving politicians along with Corbyn, Swinson, Farage, Gove, McDonald..... the list is endless. The vast majority of them are spineless these days. Where have all the statesmen (probably should say statespeople to be PC, sorry) gone?

It' fascinating that Labour so far have not one vote on here - not a plea for someone to feel sorry for them and do it - but if this is representative, which let's face it it won;t be as 99% male for a start....

Hamilton is a Pop Star

Jo Swindlerson looks like an office intern. Imagine her going out in the rain to get the coffees in. And prepping the meeting room with orange juice and biscuits. And sorting out the printer inks..

Jo Swindlerson looks like an office intern. Imagine her going out in the rain to get the coffees in. And prepping the meeting room with orange juice and biscuits. And sorting out the printer inks..

Edit: moved to other election topic 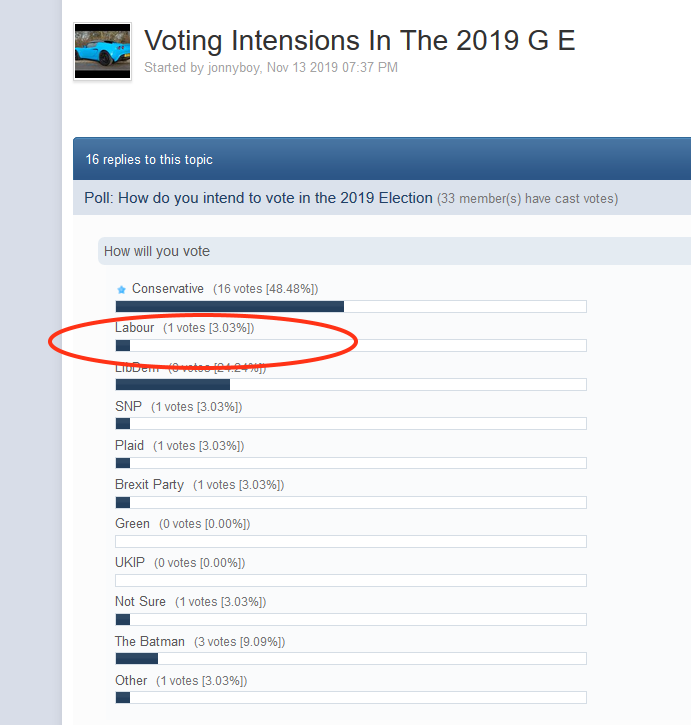 Did you not know comrade Corbyn owns a VX?

Cat in a Hat

Back to Off topic Chat